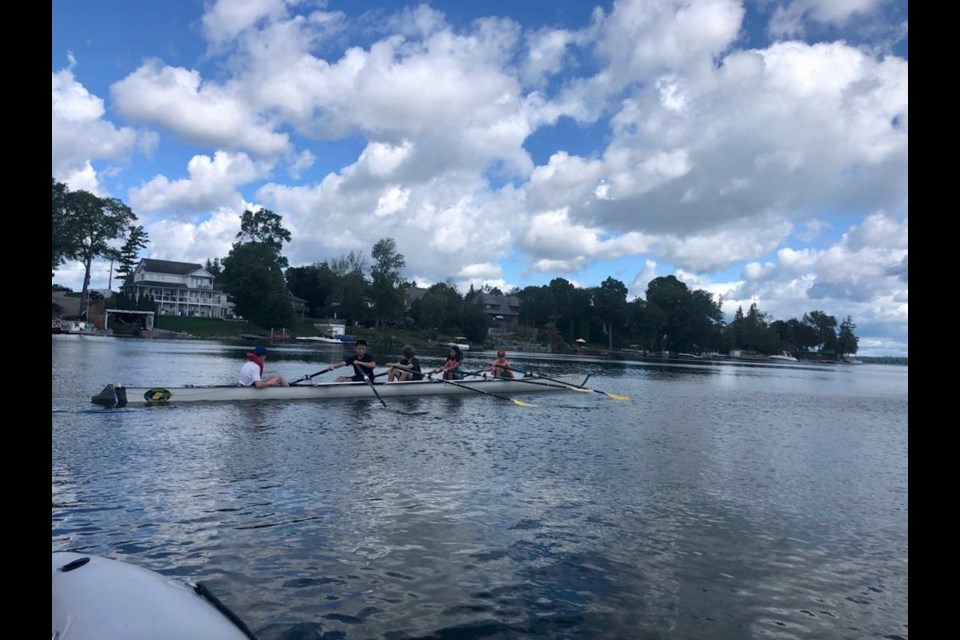 Molly Hazel qualified for the F final. The F final was scheduled for Sunday, July 24 but had to be cancelled due to inclement weather. Rebecca Bouwhuis and Cedar Wink made it to the G final. Elias Fiddick, who was entered in the time trial as the 73rd male racer, moved up eight spots after completing the trial.

Four rowers competed in the masters division of the Royal Canadian Henley Regatta in St. Catharines Aug. 2 to 7. Jane Bonsteel and Barb Pidgen raced in the women’s double and finished third. Brad Ingleton and Bob Wink raced in the men’s pair and men’s D double, finishing second in both races. In the men’s D double, they rowed 1,000 metres in a time of 3:33.90, only milliseconds behind the first-placed crew.

Rebecca Bouwhuis and Cedar Wink also competed in the Royal Canadian Henley Regatta. Cedar qualified for the semifinals in this highly competitive regatta.

The Orillia Rowing Club offered two one-week summer camps, in co-operation with the City of Orillia, in the last two weeks of July. Both sessions were well attended, and campers had a great time learning to row in touring quads and doubles.

There were on-land sessions as well to improve technique and build strength and flexibility. Some of the campers were so enthusiastic about the sport that they subsequently joined our recreational rowing program, entitling them to row during scheduled rowing times for the remainder of the season. They will also benefit from some coaching from coach Anne Hodkin during certain times.

The Orillia Rowing Club was pleased to be able to offer some complimentary learn-to-row packages to Big Brothers Big Sisters of Orillia and District. We had one Big Sister-Little Sister team take advantage of the offer and participate in a five-session learn-to-row program. The learn-to-row program is a great way to learn the basics of rowing and a fun way to get out on the lake and be active.

In The News: You can turn parking tickets into toys for local kids in need

In The News: Big Brothers Big Sisters ready to Walk for Kids’ Sake

In The News: Big Brothers Big Sisters in ‘desperate need’ of local volunteers

In The News: ‘Our wait list is very, very high’

Tee It Up for the 27th Annual Golf for Kids Sake

Over 4,000 kids on Big Brothers Big Sisters waitlist in Canada